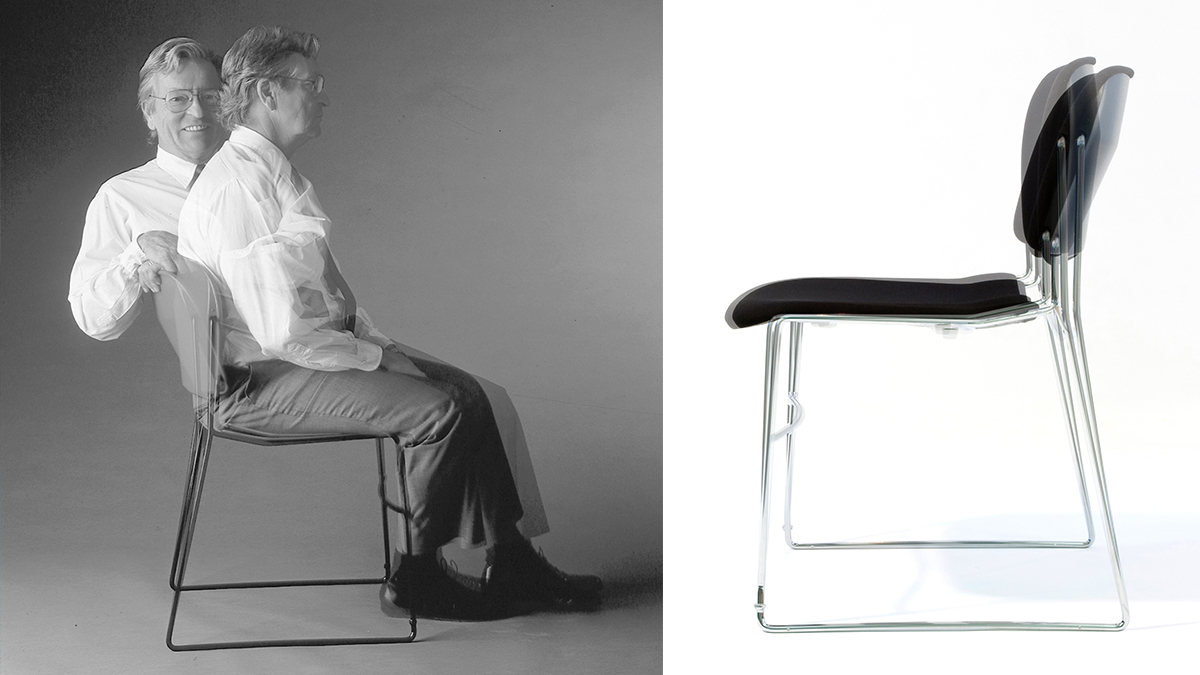 Charles O. Perry (1929-2011) was a sculptor, designer, and architect. His work embodies mathematical and scientific complexity in elegant, organic forms – often on huge scales in prominent, public locations. His iconic 'Eclipse' located in the atrium of San Francisco's Hyatt Regency Hotel is 11m tall, and must be one of the most photographed hotel lobbies in the world. In addition to large sculptures, he also created pieces for Tiffany & Co and the Museum of Modern Art, New York.

Working with KI, Charles Perry created his eponymous 'Perry Chair' which has since been selected by some of the world's largest companies and educational institutions. Launched in 1991, these chairs can be found in the UK at Ford Motors, Bonhams, Diageo, Royal Horticultural Society and Edinburgh University to name just a few. Its unique, maintenance-free articulating backrest allows for movement and provides support, making it a uniquely comfortable high-density stacking chair that can be used for longer seated periods.

Here, we hear from the man himself, a summary of his life and his journey to creating the chair that bears his name – written just a few years prior to his death.

"I was born in Helena, Montana and I loved the place. We lived in a big house at the foot of Mount Helena. We would scramble up the hill and even find arrow heads in the spooky caves up there. My first memories were of making things, I made a model snow sled that seemed to surprise everyone and gave me an early reputation as an artist.

We moved to Berkeley, California when I was ten years old. That was when I designed and built my first chairs. The local grocery store was just around the corner and I collected the vegetable crates, carefully pulling out he nails and straightening them. It became a puzzle to put the boards back together into a strong chair. Our cleaning lady liked the results and she paid me fifty cents apiece for ten chairs for her Sunday School class. I remember how to build that chair to this day.

A high point in my childhood was second grade when we were seriously taught woodworking. In the Boy Scouts, I invented a lantern, and a very light backpack. Some summers were spent at the school's metal shop, and wood shop. Others were spent in the workshop at my father's mine in Montana.

And so it went, always puttering and inventing or improving. I even made a better telescope for my forward artillery outpost in Korea. I seem to have invented my way into Yale Graduate School in Architecture without doing undergraduate. This was where my next encounter with chair design occurred. I wanted to make a chair with a greater sense of enclosure than sense of support. I should have concentrated on comfort. There was a second chair that I had almost forgotten that I might do again someday.

Actually, I was more interested in sculpture and its relation to mathematics and I kept this up while I was practicing architecture in San Francisco for Skidmore Owings & Merrill. I registered my first patent in 1961 for a geometric toy later sold to the Museum of Modern Art in New York.

I was doing very well in architecture and was working closely with Nat Owings on the Mauna Kea Beach Hotel for Laurence Rockefeller. The realtors wanted a more compact scheme and I left the project. I then applied for and won the Rome Prize in Architecture. I prepared a one-man show in sculpture in the months before leaving for Rome. The show was a success and in addition I secured two public commissions.

Sheila and I had met and married in New York while I was working on the Hawaiian hotel. Now we were on our way to Rome with our two baby boys and a borrowed four thousand dollars. On arrival in Rome, I was urged to continue sculpture by my fellow artists. It seemed I had chosen art for survival.

Soon, I was travelling to the States gaining commissions and having gallery shows. Fortunately, I met the Venetian architect Carlo Carpa at a lecture and we hit it off. Later at the Venice Biennial, I was crossing the plaza and I bumped into him. "Perry, you have photos in that box, let me see!" I showed him one of my chess sets and without moving his head, he struck out his arm and returned it with someone in it. He said, "Perry: Gavina" and showed him the photo. Gavina said "Perry; lunch". That was all the English he knew and I spoke no Italian, yet.

We became friends, which turned out to be very important because soon disaster struck my sculpture work. My clients were killed in an airplane crash and we were wiped out financially. Gavina came to the rescue and hired me for 10 days a month designing furniture. This lasted a year. Gavina knew all the greats of Italian design and often gathered them for vociferous lunches about design.

I produced an edition of objects, a small amount of design but I absorbed a great deal. I suppose that the combination of my predilection toward geometry and Rome's 'agelessness' melded with the brilliance of these Italians and added several facets to my Bauhaus leanings.

We spent 13 years in Rome and produced three more children for total of five. Even with the considerable success in sculpture it was a financial  scramble. We eventually moved to the water's edge in Norwalk, Connecticut in 1977. By now, we had been delivering puzzles to the Museum of Modern Art for 10 years. We called them tuition makers. In 1976, I had installed the piece in front of the National Air and Space Museum in Washington DC. And commissions were plentiful. Soon I was asked to go in another direction and design a line of jewellery for Tiffany's. It was a success and we had our "Breakfast at Tiffany's", but it was soon embroiled in their corporate changes.

"The design of a chair is more demanding (for me) than sculpture. The key element in both of them is appropriateness."

It was about 1989 when my friend, Tom Hacala, asked me to go with him to NeoCon in Chicago to give him my perspective on the furniture industry. I came away commenting that in 15 years all that they had done was move the chair pivot forward to the front of the chair. "Why didn't they put the support under the arms?". Well, that question set me on still another course. I  immediately made a prototype of the idea and patented it. Eventually, through Charles Pollock to Larry Ryan, I met Dick Resch of KI; I progressed with my idea.

Finally, I had a prototype to take to Green Bay. I spent the morning touring the factory and in the afternoon, I was told that the chair was too complicated for them. As I was stepping on the airplane I got a flash inspiration of a chair using my design principal which would fit their production line. Six months later, we had the chair on the market. Sometimes ideas arrive fully cooked.

Life changed then and there, not all that fast but steadily. The design of a chair is more demanding (for me) than sculpture. The key element in both of them is appropriateness. Sculpture must be appropriate to the site and to the people it is for. Then there are all those nuances for each endeavour.

In the case of the Perry chair, my input insisted that it must be comfortable and uncomplicated. As it turned out it was a case of 'less is more'. By eliminated to connection of the seat to the back, it freed the back to react to the movement of the user. Actually, the design was a part of the more complex chair I had presented. In this case, the bottom of the back supports the back of the seat. The user's weight pulls down on the back and provides the counter-weight to the tilt of the back. Thus, the heavier person has more counter force to equal his weight. The same for the lighter person."

Find out more about Perry Chairs

First launched in 1991, the Perry chair remains unrivalled for comfort in HD seating. Its stylish, elegant design with a unique articulated back movement for longer, more comfortable seating periods makes it a versatile solution. The addition of optional, removable tablet arms gives even greater functionality for learning and training environments. 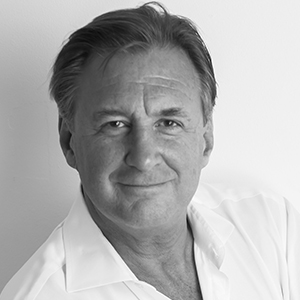 Jonathan originally trained as an architect/designer before moving into sales and marketing in office furniture and property. His expertise covers real estate, workplace strategy and product design just to name a few. Jonathan founded the Design Guild Mark in 2007, now the UK's leading recognition for volume production furniture, textiles and finished surfaces. He is also a Fellow of the Chartered Society of Designers, and the Chairman of the British Furniture Confederation (BFC), the single voice of the furniture, furnishing and bed industries to the UK government.